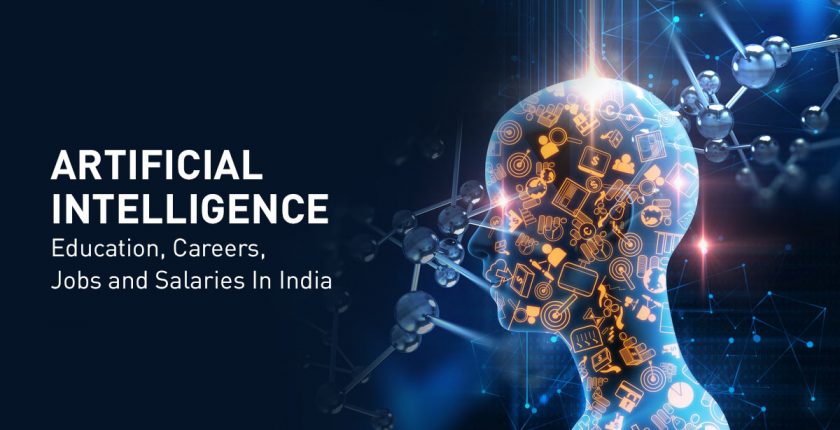 But, is it really so?

As said by Rekha Menon, Chairperson of Accenture, India, “This may be true for certain jobs, but not all, and in fact AI will end up creating new jobs—many of which don’t currently exist”. Thus, though it is not entirely untrue that AI will affect the employability quotient across the globe, we should also not forget that people are getting habituated of doubting every new technology as a threat.

The following sections will highlight AI education in India; AI salaries in India; and some of the job avenues that AI has opened up lately.

A Bachelor’s degree in Computer Science or Mathematics is the first step toward a career in Artificial Intelligence. But a Bachelor’s degree can get you the entry-level positions only. To be an AI specialist, a more advanced program is required. Such a program should encompass the following: Bayesian networking (including neural nets), Computer Science (including popular programming languages), Cognitive science theory, Physics, Robotics and various levels of mathematics (algebra, calculus, logic, algorithms, probability and statistics).

The best programming languages that can instantly kick-start a career in Artificial Intelligence are Python, Java, Julia, Haskell, Lisp, Prolog and R. 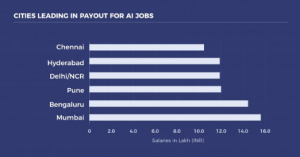 Some of the top companies that employ the maximum number of AI professionals in India are Microsoft, Accenture, Amazon, Nvidia, IBM, Tech Mahindra, Capgemini, Cognizant, etc. Not only have the big names, but even startups have contributed a significant share of employment quotient in India.

For a career as Machine Learning Engineer, a strong grip on both Software Engineering and Data Science domains is essential. A programmer’s primarily responsibility is building and deploying large-scale AI interfaces. But, besides this, he/she works closely with a Data Scientist to make sure that the models prepared by the latter are performant and accurate. A Machine Learning Engineer uses programming frameworks and big data tools to ensure that the raw data that run in a company’s pipeline and the refined data that come out of the a company’s system are always presentable.

Recruiters prefer a master’s or doctoral degree in Computer Science or Mathematics, with strong backgrounds in programming languages such as Python, Java and Scala. Experience with cloud applications is also helpful. Some other skill sets that can be counted as added advantage are: data wrangling; familiarity with distributed computing; Git, GitHub, Dockers and APIs; Spark & Hadoop; Machine learning/Deep learning algorithm; TensorFlow; and Data Storage and Pipelines.

As more and more industries are getting hooked up with artificial intelligence technologies, machine learning engineers have been gaining quite heightened attention lately. The average yearly salary for a machine learning engineer is an alluring $125,000 to $175,000 in the US and INR 10,41,182 in India, with highest paying companies offering more than $200,000 to top talents.

As Artificial Intelligence is growing more and more ubiquitous, the requirement of adept AI analysts is becoming increasingly important. In fact, Paywall ranks AI Analyst to be the second fastest growing career opportunity in the US. An AI Analyst helps in making informed business decisions by generating, maintaining and delivering detailed and appropriate reports from the large volume of data gathered by an artificially intelligent system.

An AI analyst should be having a Master’s or doctoral degree in Computer Science, Engineering or Artificial intelligence. He/she should have a grasp of Big Data technologies such as Hadoop, Pig, Hive, Aster, Spark; cloud-based solutions such as Microsoft Azure; programming and design techniques such as .Net platform, C# / C++, Java, Python, Scala, TensorFlow, design patterns, scripting; and data exchange technologies like JSON.

According to a report by Analytics India, the median salary for an Analyst was 12.7 lakhs for the year 2017, with Mumbai being the highest payer at almost 13.3 lakhs per annum, followed by Bengaluru at 12.5 lakhs per annum.

As a subject–matter expert in several disciplines of Artificial Intelligence, a Research Scientist oversees the transformation of a prototype to a product. In a nutshell, a Research Scientist fixes real-world technical problems; builds state-of-the-art algorithms on machine learning experimentation; enhances efficacy of existing models; and critically analyzes an algorithm/solution/model before the product is being launched into the market.

Bengaluru, where the job market for AI Research Scientist is the most active, is the highest salary payer among all the other Indian states, as noted by ZipRecruiter.

The primary responsibility of an AI software developer is to write codes to design, develop and deploy machine learning and AI systems. But he/she is also responsible for the entire software development lifecycle that includes designing and updating software databases; gathering business system requirement to get an insight on the product design; testing and debugging programs to make existing software marketable.

An AI Software Developer needs to have a Bachelor’s or Master’s degree in Computer Science/Computer Software Engineering, Mathematics or Electronics. A Software Developer who specializes in AI and machine learning should be familiar with designing and optimizing complex AI systems, besides writing efficient codes.

As per Glassdoor, a Software Developer’s average annual base pay is INR 550,000, with the lowest being 271K per year and the highest being 986K per year.

Not only does a Business Intelligence Developer analyze complex datasets to identify market and business plans, but he also designs and maintains such datasets in highly accessible cloud-based platforms with the help of software development tools. He researches and devises solutions for existing problems within a business, besides handling online analytical processing (OLAP). Database-wise, both relational and multidimensional databases are looked after by him. Thus, he is responsible for taking the business in the right course by increasing its bottom line.

On average, a Business Intelligence Developer’s annual income is approximately INR 472,775 in India as per PayScale. This average changes with experience.

A Speech Scientist in the AI domain is mostly a data scientist or computer scientist who improves automated speech recognition in AI systems with the help of Natural Language Processing and Machine Learning. His/her primary responsibilities include designing voice recognition software and other artificial intelligence systems to recognize language.

A Speech Scientist requires a background in machine learning in speech and/or language/text/dialog-processing fields; hands-on experience in Deep Learning; grasp in software languages like C++, Java and Python; and Natural Language Processing and Speech Recognition techniques.

According to a recent report by Analytics India, India has approximately 40,000 AI professionals. Artificial Intelligence in India can therefore neither be described as sluggish nor as meteoric. Countries like China and the US have reached strikingly ahead, and India has a lot of catching up to do. Great Learning (an online ed-tech company) reported that, despite the 30% growth in AI industry (which means a market worth of $230 million) last year, more than 4000 positions in different domains of AI remain vacant in India due to the dearth of qualified talent at the mid and senior levels. Of the current working AI professionals in India, almost 55% have less than 5 years of total work experience, while only 23% have more than 10 years of total work experience. Only 4% of the current AI professionals have worked on advanced AI technologies, such as deep learning and neural networks—which make approximately 530 professionals for Deep Learning, 630 for Machine Learning and 710 for Natural Language Processing for every 1000 AI jobs posted.

Although discouraging for the AI-driven economy of the country, this demand-supply gap can turn out to be a golden opportunity for students aspiring to join AI. The wheel can be turned in favor of India with proper collaboration between industry and universities. Such collaborations will not only provide hands-on, industry-oriented training to students but will also start filling the demand-supply gap in the long run, hence strengthening both the economic and educational roots of the nation.

A pioneer in enabling state-of-the-art education, iNurture works around a unique University-Industry Partnership theory that has been instrumental in shaping the Artificial Intelligence education in India. Under the shadow of this model, different universities have added to the swell of AI power in the country by offering undergraduate programs in Artificial Intelligence.

7 Tips to Boost Your Career After Project Management Training
Blogs ,

Project Management Life Cycle – How it Affects the Success of a Project
Blogs ,