Top 9 Sectors Driving the Growth of Industrial Robotics in India 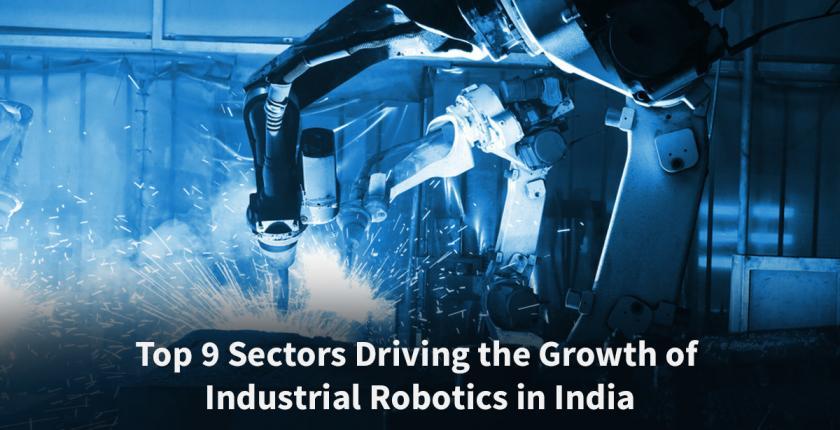 Robotics in India is going through a phase of accelerated growth. But what fuels this acceleration? Is this news about growth a mere token of consolation for the Indian readers/bloggers/audience or is automation indeed trending in the country?

About Being a Token of Consolation

For a clear-cut answer, let us go straight to some serious statistics.

As a result of the Make in India campaign, Robotics companies in India are springing up at an astonishing rate. India now has the third-largest startup technology base in the world.

Believe it or not, India is projected as the Big 3 in the robot race. Malcolm Frank—head of Strategy at Cognizant and author of What to Do When Machines Do Everything—supported this projection by saying “India, after US and China, is the frontrunner in the automation race”.

So, with a clear idea that the news about India’s exponential growth in robotics is anything but bogus, let us proceed to the next section.

Who’s (or Rather What’s) Behind the Wheel?

An expanding knowledge bank, eagerness to find easy solutions to difficult problems (agriculture-related suicides, medical imprecision, enraging attacks by neighboring countries, etc.) and a never-seen-before thirst for entrepreneurial ventures must have hastened India’s stride toward automation. The country is slowly but steadily pushing its way to the front, stepping over every stumbling block.

Let us take a glance at the sectors driving the growth of industrial robotics in India.

“The automotive industry will remain the main driver of the increasing robot installations in India”– Junji Tsuda, president of the IFR.

India is expected to become the 4th largest automobile producer in the world by 2020, after China, US and Japan. The industry has registered a CAGR of 14%, with profit scaling to USD 39 billion in 2015–2016. Exports also show a similar growth pattern, with a CAGR of 14% that scales to USD 10.8 billion.

Although factors like robust demand, rising indigenization, export opportunities and recent policies have quite strong roles to play in the swell of the automotive sector, adoption of Robots is the prime force that has made this success invincible.

So, the answer to what’s common among the Indian automobile giants Hyundai, Honda and Maruti Suzuki would be—they manufacture great cars, draw huge profit and have robots at their service.

There’s an unimaginable fetish for electronic appliances all over the world. In fact, it isn’t a fetish anymore; it’s a dire need. In India alone, the market for electronics and home appliances is expected to reach a staggering $400 billion by 2020, according to experts.

This upsurge in the Electronics industry can be dedicated to an equivalent increase in the application of robots in the industry, which supports IFR’s report stating “growth in robot sales to the Electric and Electronic industry is in part linked to the growth of the industry itself”. From cutting metal housings to assembling miniature, fragile components on boards and fro quality testing to the transportation of the finished goods, robots can accomplish myriad tasks with great precision and speed, thus hastening the entire production cycle.

Robotics has become imperative in the Food industry. A report released by ResearchAndMarkets.com anticipates the global food robotics market to reach $3.35bn by 2025, with Asia-Pacific deemed to have the highest CAGR.

Robots are no longer confined to palletizing and packing food, but are slowly entering our kitchens.  Mechanical Kitchen, a very recent Bangalore-based startup, is keeping no stones unturned in developing the Mechanical chef—a robot that will cook hundreds of customizable Indian cuisines with ease. Not only this, Chennai homes the first robot-themed restaurant “Robot” that has real robots for waiters. Robots have established their domains in meat processing and dairy industries as well (Automatic Milking Systems and SCARA robots). Apart from these, robots can efficiently carry out cutting and slicing; picking and placing; cake decorating; burger making; pizza making; and washing up.  (Graph presents different tasks and the extent to which robots can carry them out.)

Ever since Dr. Naresh Trehan conducted India’s first fully robotic heart surgery in 2002, robots have become indispensable in Indian operation theatres. Accompanying him in the surgery was minimum invasive surgery expert, da Vinci—the endoscopic coronary bypass system created by Intuitive. Another unique endeavor was from gastrointestinal surgeon Dr. Apurva Vyas of Sterling Hospital, Ahmedabad. With the help of da Vinci, Dr. Vyas performed robotic surgery on a 37-year patient suffering from a rare condition—median arcuate ligament syndrome. This surgery was the first of its kind in India and third in the world. However, history was created when Gujarat-based cardiac surgeon Dr. Tejas Patel operated on a patient with block artery while sitting 32 km away from him—this was the first telerobotic surgery ever.

Besides surgical interventions, medical robotics in India has expanded its reach to medical transportation, prosthetics, sanitation and disinfectants, prescription dispensing and much more.

These are a few of the many success stories of surgical robotics in India. The Indian medical market is adapting robotics at a rather fast pace. With about 50 players in the market, India’s surgical robotics domain is estimated to expand at a CAGR of 20% between 2017 and 2025, while the global estimate is 12% (BIS Research). This expansion will scale to $350 million, compared with $64.9 million in 2016.

The answer to ‘why the sudden surge’ is the appetite for improved efficiency, enhanced quality, reduced cost for human labor and competitive attempts of the warehouses at getting through the e-commerce boom. Today, warehouse automation stands as the backbone of important e-commerce players, like Flipkart, Zivame, Myntra, Pepperfry etc., and their delivery partners, like Gati Ltd, DTDC etc.

India is in a state of no war, no peace with two of its neighboring countries since time immemorial, not to mention the incessant terrorist activities that handicap the country every now and then. The current military scenario in India calls for definitive actions. Hence, the Indian Government has thought of bringing autonomous or semi-autonomous robotic systems into the battlefield. As robots can operate under difficult situations and varied environmental terrains, they may present the ideal solution to these attacks.

Currently, robots in the Indian Army are used as unmanned aerial vehicles (UAVs; commonly called drones), unmanned ground systems (UGS) and landmine/explosive detection/disarmament devices. However, the Government and the Indian Army are interested in harnessing this technology beyond their existing roles. Centre for Artificial Intelligence and Robotics (CAIR), the primary R&D laboratory in Defense, is at work since 1986 and has created myriad robotic systems for the Army, including DRDO Daksh, Wheeled Robot, Snake Robot, Legged Robot, Wall-climbing Robot, Robot Sentry, etc.

This seals the fact that the Indian Defense sector has significant roles to play in the growth of robotics in the country.

The rise in chronic diseases and conditions has led to a huge demand of pharmaceuticals in the market. The industry now uses robots in their production to meet the demand and hasten the process. Robotics plays a vital role in accomplishing complicated processes like R&D, production and packaging in the Pharmaceutical industry. The various benefits of automation in the pharmaceutical domain include: enhancing quality and quantity of drugs; preventing workers’ exposure to hazardous environments; eliminating human error; and reducing the potential for human contamination.

With robots assisting the drug-manufacturing process, the global pharmaceutical market is expected to reach USD 119.5 Million by 2021 from USD 64.4 Million in 2016—a CAGR of 13.2% during the forecast period.

These were some of the sectors that have shot up the sale and use of robots in India. But will robots be a medium for the greater good or just a lucrative intervention?

Though Luddites have succeeded in painting a dystopian mechanical picture of robotics in our mind, let us link the growth of robotics to the rise of a buoyant society for this one time.

India is primarily an agricultural country; but, ironically, the only thing that’s in store for the Indian farmers is never-ending poverty.  Robotics has every potential to change that scenario.

With robots, farmers can closely monitor the land, besides obtaining site-specific and timely data about the crop. Robot-assisted precision irrigation systems can help in the efficient use of water by directly watering the roots of the crop. Fertilizer-, pesticide- and weedicide-dispensing robots can protect crops by preventing excessive use of chemicals. Besides these, robots can help with the picking and harvesting of crops. Once harvested, the crops/fruits/vegetables can be thinned or pruned and packaged for marketing with robotic assistance. Robots can, thus, increase the agricultural yield to manifold.

Robots can be harnessed to undo what man has done to the environment.

The sight of plastic bottles and packets floating freely in the crystal-clear water of Unmgot River (Dawki) can bring down the spirit of anybody. Littering has only started there; imagine ten years from now—the clearest river will turn into another sad story of human inhabitation.  Robots can prevent this! A trash bot named SEARCh has been developed by students of Vivekanand Education Society’s Institute of Technology that can skim waste from the water surface. This may be the start of a new road toward clean water bodies.

Autonomous robots can also be used to clean-up hazardous or contaminated environments, such as nuclear test sites, like Pokhran, or PCB-contaminated soil.

If you were avid while reading, you must have learned which sectors drive automation forward and which sectors hold great promise for the future. Probably, now you are able to fathom what sectors need to be focused on to drive forward robotics in India. Play your part in this new age accordingly—if you are someone from the Government make robotics reachable to the public, and if you are a student or an employee grab everything that’s on the plate to get upskilled.

You will be glad to know that iNurture, in collaboration with some of the top-notch Universities, is introducing PG Diploma in Robotics. You can catch hold of one of these specializations to get ready for automation.