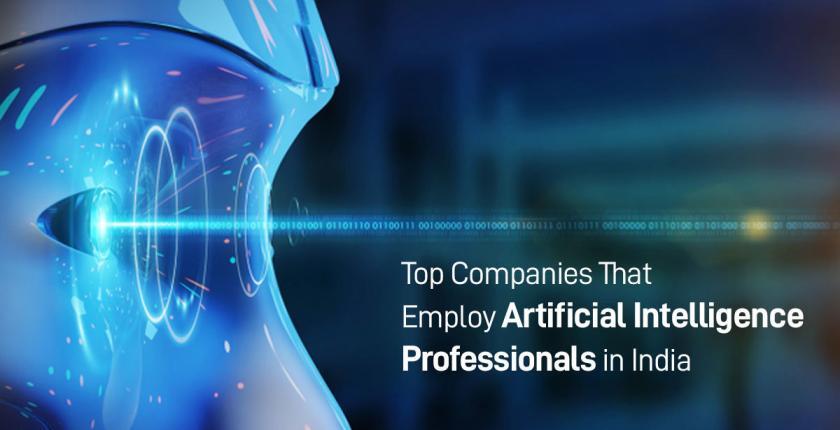 India is no longer considered a laggard when it comes to the development of Artificial Intelligence. The field is rapidly gaining ground in India, engulfing every sector imaginable. From retail to environment, every sector has in some or the other way been influenced by AI.

According to the startup tracker Tracxn, India homes nearly 300 startups that use AI. Among these, 23% are providing solutions to multiple industries, 15% are into e-commerce, 12% into healthcare, 10% into education and the rest are taking up other fields such as retail and logistic—as presented in a 2017 report by Kalaari Capital. In fact, India ranked the third biggest AI-focused startup hub among the G20 countries in 2016.

Not only is the private sector, the Indian Government too is taking an active role in the leapfrog of AI in the country. The National Institution for Transforming India (NITI Aayog) has launched an AI-oriented research program that has come up with a three-pronged approach to strengthen the AI strategy in India.

Due to the collaborative effort of the Government and the private sector, tremendous growth has been witnessed in the field since it first kick-started. According to a survey by Finnish AI-based solutions specialists Zyfra, India is the 13th most advanced nations, after Canada, in terms of development in Artificial Intelligence. 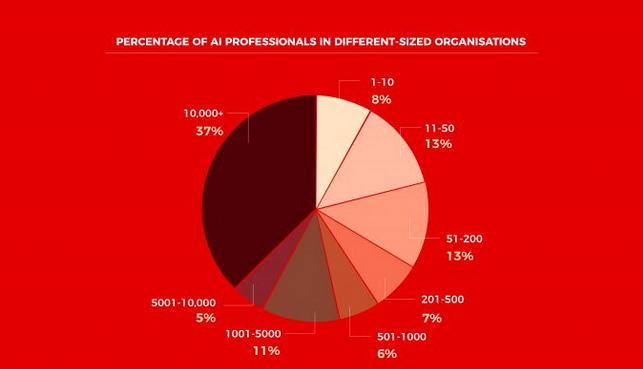 Let us find out about a few leading Artificial Intelligence companies in India that have taken the country on the path of digital disruption. Let’s start with a few of the startups and mid-size companies.

Originally started by the two IIT Mumbai graduates Sankarapu and Marla, Arya.ai has now been named as the top 4 next-generation technology startup at Silicon Valley Forum held at Microsoft’s US Campus.

The firm uses complex Deep Learning Algorithms to create General AI systems that can adapt and learn multiple use cases with minimal human involvement and, in the process, help taking effective decisions faster than the normal rule-based narrow AI. With the vision of simplifying the process of building Artificial Intelligence, Arya.ai has developed VEGA. Vega is a workbench that helps developers in building complex neural networks by automating mid-level tasks using deep learning algorithms. The workbench has found its use in handling any use cases like predictive modeling, image classification, automation etc. across several verticals, such as banking, insurance, retail, healthcare, oil and gas. Its innovative solutions have not only helped the firm raise a Pre-Series A funding of $750K from YourNest Angel Fund and VentureNursery, but also pushed it forward to be the first Indian startup to be selected as the top 21 innovator startups by Paris&Co.

With unattended manholes here and there; cows and goats apparating from nowhere; and rash drivers who consider streets as their private race courses, driving in India is more like a game of Mario. Aggarwal and Julian endeavored to develop an advanced driving monitoring and driver assistance system as a counterblow to such adversities. They later came up with DriveriTM, which is an increasingly intelligent and exceptionally aware artificially intelligent platform. With minute-to-minute analysis of driving performance, 3D mapping, auto-braking, high-level fleet metrics, etc., the Driveri portal provides real-time, actionable information, which makes transportation safe. The startup has raised $21 million in Series B funding from Reliance Industries, M12 (Microsoft’s corporate venture arm) and Point72 Ventures.

AIndra is an AI-driven MedTech company that drives with the goal of fixing the broken healthcare system in India. It is into developing faster, smarter and more accurate solutions for the existing healthcare issues. One of its products is CervAstra that detects cervical cancer using the following three platforms: Aindra IS, the automated stainer for staining biological samples on a glass slide; Aindra ASTRA, a computational pathology platform; and Aindra VisionX, a telepathological system that enables a high-definition digital image of an entire slide.

Artivatic.AI uses a human brain-like Artificial Intelligence system that applies psychological, genomic and neurological patterns to provide solutions for Fintech, insurance businesses and the healthcare sector. It has developed an AI-based B2B platform that helps in customer onboarding and engagement; improving operational efficiency and cost constraints; timely execution of underwriting and claims; and setting a fraud/risk analysis system. Moreover, the company is building a system that provides insurance policies and loans to individuals within a matter of minutes. Within a short span of 3 years, Artivatic.AI has stepped up as the proud manufacturer of a vast range of products such as AVGenomics, AVACross, AVPredict, AVDecision etc.

According to a report, Artivatic.AI has raised a total of INR 10M in funding over 3 rounds.

Number of employees: 1–50 as per Glassdoor<

Mad Street Den is a Computer Vision and Artificial Intelligence company that goes by the mission of building and deploying generalizable intelligence on scale. Its brand VUE ai is an end-to-end retail automation platform that offers vertically integrated solutions for the industry. Using Image Recognition and Data Science, the platform can extract and analyze catalog data with respect to user behavior, finally helping the customer in selecting their desired product. The platform is significant because it learns, enhances and automates the entire value chain and also because the company has raised $17 million in a Series B funding round led by Falcon Edge Capital.

Plug-And-Play Engine for the World

Number of employees: 1–50 as per Glassdoor

The 50-membered company has introduced Fluid Motion —a motion and gesture recognition solution—that turns an ordinary screen into a smart and interactive one, giving an augmented reality-like experience. The RBL bank has already installed Fluid motion in their Nepean Sea Road branch. When a customer walks in the bank, the motion sensors detect his/her presence and start talking. A digital environment then gets created, in which the customer can go through the products using gestures. While the customer is busy banking, FluidAI’s software will be constantly studying his/her face to gauge the level of interest in home loans or opening an account. If it senses that the customer is keen on a home loan, it’ll suggest options and plans suited for the customer. The system has been liked and adopted by several clients like Vodafone, Toyota, Deloitte, Emirates NBD, Barclays, Rolls Royce, Accenture and Axis Bank.

But making banking fun is not the sole objective of the Aggarwal brothers; they aim to be the plug-and-play engine for the world.

Entropik Tech believes that making a purchase is always related to an emotional decision and, hence, assessing the emotions that people undergo before making a purchase can serve as the actual feedback for a product and its manufacturer. The Entropik Tech team has, therefore, set their mind into developing an emotionally intelligent consumer research platform to make sure that a product resonates with the emotional level of the customers. The team has come up with Affect Lab—a stop customer behavior research platform that uses EEG, facial expression analysis and eye tracking to decode customers’ cognitive and behavioral metrics. The team has been helping a wide range of Brands across FMCG, Media, Automotive, Education, Healthcare, Advertising, Consumer Durable, E-Commerce, Banking and Finance industries to understand their customers and take actions in real time. Being the only Indian Artificial Intelligence company to be equipped with EmotionAI, Entropik Tech has raised $1.1 million from Bharat Innovation and Parampara Capital.

After brushing through the startups and mid-size artificial Intelligence companies, let’s now explore the contribution of a few tech giants in employing AI professionals in India.

Bringing People and Organizations Together

Microsoft has always been in the foreground in terms of adopting and molding new-age technologies. From the AI-powered cardio API platform – which lets anyone who visits a hospital find out their heart risk score without a detailed health check-up—to the AI Sowing App powered by Microsoft Cortana Intelligence Suite – which sends sowing advisories to participating farmers on the optimal date to sow seeds without the need for installing any sensor in their fields—and from the Talent Assistant chatbot Qton to our own super friendly desi chatbot Ruuh, Microsoft has been empowering and broadening the field of AI in India since its establishment in  1990. Today, Microsoft has branches in 11 states of India and is aiming to train 5 lakh youth in AI across the country over the next three years; set up AI labs in 10 universities; and upskill 10,000 developers in emerging technologies.

Amazon has built a strong e-commerce market in India by betting heavily on AI and Machine Learning (ML). With several AI and ML projects, such as AI as a service, Amazon Echo, Amazon Web Services etc., in the bucket, Amazon is one of the topmost companies employing AI professional. After the US, the company’s second largest workforce is based in India, with a headcount of 50,000 and, until last year, the company was looking to employ 1000 more professionals for job roles in data analytics, AI, cloud computing, natural language processing, automation and R&D.

Trendsetter for the Post-Digital Future

For the global tech leader Accenture, AI is all about creating greater values for the people and the community. With dreams of bringing AI to the general masses, Accenture in India has teamed up with the NGO Akshaya Patra to increase the number of mid-day meals to children across schools in India with the help of AI. It has also developed an AI-powered smartphone, Drishti, to help the visually impaired people improve the way they experience the world around them. In the industrial front, it has extended its contribution as the AI-based chatbot Digital People Advisor (DiPA) that offers a personalized digital experience while addressing queries related to HR processes, policies and procedures.

According to a report by Glassdoor, Nvidia has been ranked number 2 on their list of top companies hiring professionals adept in AI. Basically known for its pioneering endeavor in introducing Graphics Processing Units (GPUs) to the world of gaming, Nvidia has now fueled the next era of disruptive computing by equipping their GPUs with Deep Learning and AI. The result is a revolution—TEGRA X1, NVIDIA DRIVE for autonomous cars; NVIDIA® DGX-1™ the first deep learning supercomputer in a box; NVIDIA® Jetson™ AGX Xavier™ AI robotics solutions for manufacturing, delivery, retail, smart cities, etc.; NVIDIA Iray® VR for simulating light and materials to create interactive, photorealistic virtual environments; and a myriad of others.

Some other tech giants that employ the maximum number of AI professionals in India are TCS, Cognizant, Infosys, Wipro, IBM, Capgemini, HCL Technologies and so on.

The list doesn’t end here; in fact, it has been growing bigger with each passing year. Every now and then a new idea gets explored, a new artificially intelligent system gets created and a new startup springs up. With AI, ML and deep learning, the industrial revolution is almost here. The only thing that’s keeping us apart from the revolution is ourselves. We need to accept, adopt and adapt. We need to get acquainted with artificial intelligence because AI is everywhere and because it’s high time.

But educating the masses about an emerging technology in a country of 1.3 billion people isn’t easy. Moreover, the number of colleges and universities will never suffice the growing need. Only fruitful Governmental policies, responsible educational institutions and enthusiastic students can be the solution.

As an ed-tech company, iNurture believes in its responsibility of spreading new-age technologies as far and wide as possible. With its unique University–Industry Partnership, it collaborates with different universities offering UG programs in Artificial intelligence to help the student community in seeking the right direction. iNurture also uses an artificial intelligence-based algorithm Krackin to help students quantify their employability, discover their skill gaps and plug through a personalize d learning assistant.